STEP 1: Install brew so you can have "gdu" Which is the GNU version of linux "du" on your MAC. As opposed to the BSD version (which has less options) that comes pre-installed.

STEP 2: cd to the parent director where you want to check the sizes and run the following command:

And then you can just keep repeating the process to figure out where all your diskspace is being spent.

Here are the examples of the times I've personally been put in FB Jail for simply being a gay man:

#1 - Standing by a pool in a speedo... This one is crazy. First it got flagged for "Nudity" even thought there's no nudity. Then I contested it and won and got a statement back saying it did not violate any of the community rules. Great I thought, I'm good to go. But then I made an edit to the photo (upped the contrast a bit) and re-uploaded THE EXACT SAME PHOTO and guess what? Straight to FB Jail I went. EVEN THOUGH - it had already been reviewed and approved as not violating anything and EVEN THOUGH there was no nudity in the photo. Straight to FB Jail I went for the crime of being a gay man in a speedo.

#2 - Standing in my shower with swim trunks on. Apparently gay men in swim trucks is a trigger for the Facebook Community reviewers (in whatever bigoted country they are in). Because here we go again. No nudity in the photo, and yet again, off to FB Jail for "nudity" EVEN THOUGH there's NO NUDITY in this photo. Again, the crime of being a gay man on Facebook... off to FB Jail again.

I wanted to start a list of words or phrases that will get you put in Facebook Jail:

2- "dumb gays" - Again, talking about a subset of the population. As with any group there's a section of gay culture that are just... well... how does one say it... just dumb... really really dumb. These are the catty gays... the druggie gays... the loser gays IMHO..., but if you refer to them as "the dumb gays" - yep - back to Facebook Jail you go for "hate speech." EVEN THOUGH you are not talking about the group as a whole, and EVEN THOUGH I was literally talking about a group (gays) that I'm personally a member of and by FB's own rules it's not "hate speech" if you are talking about a group that you are a member of.... but didn't matter to the FB censorship bots..... back to FB Jail....

3- "white trash" - yep... this is a common one. Apparently you can no longer say "white trash" on Facebook. I just had a friend of mine get put in FB jail for using the phrase "white trash" in a post. Off the FB Jail he went.

4- "boys stink" - You would think that would be an easy one and not cause any problems right? Wrong... not to the Facebook Bots.. that's gender bias to the FB bots. I know of at least one lesbian who was obviously being sarcastic and satirical when they wrote "boys stink" but the FB Censorship bots have no ability to detect satire... so off to FB Jail she went.

5- "men are trash".... One guy said, "I said men are trash but I wrote it out m*n and still got called out for hate speech." So even changing when changing the letters from "men" to "m*n" and he still got put in FB jail.

Add more in the comments please.

Notice how Facebook bots are flagging these articles (that I was trying to share) as COVID19 articles.

EVEN THOUGH they had absolutely nothing to do with COVID19.

Facebook bots are running completely out of control now.

This is a cartoon about what’s happening in the world right now.

The bots flagged it at “COVID19 misinformation” and removed it from FB.

Be careful what you post on facebook right now, since Facebook has released the bots and is not allowed "appeals" for Facebook Jail due to staffing issues due to COVID19. So in other words bots are reading your posts and deciding who's going into Facebook Jail.

I know a lot of people in the last week who've gone to Facebook Jail (myself included):

1- A lesbian wrote a sarcastic post simply saying, "Boys stink." and she went into Facebook Jail because gender is a protected category.

2- A friend of mine posted a Trump meme, and called out Trumpsters for being idiots and he was put in Facebook Jail for "diminishing" another group.

3- I got put in facebook for saying "the dumb gays" in reference to members of the gay community who are not smart.  I was put in Facebook Jail for "hate speech" even though I myself am gay.

So I got a popup when one of my actions was blocked on FB to give feedback.  I typed up my reply and tried to submit it, but even my ability to submit feedback is blocked.....

Here's what I wrote up:

"I was wrongfully put in Facebook Jail because of a post i made about my own community.  I'm openly gay.  In the post I stated "#thegays" which I use to reference to the club scene gays, and later I said "the dumb gays" which I mean as the section of the gay community who are not smart.

Instead, someone misread those two and thought that I was speaking about the gay community in general and putting down gays as a whole which is completely incorrect.

That said, either a human or a bot misunderstood this and flagged me as "Hate Speech" and because of COVID19 I don't have the ability to request an appeal. And so now.. I'm in Facebook Jail and my actions are blocked.

And because of COVID19, there's no chance for me to appeal and no one for me to talk to.

So I got flagged by a bot, and put in Facebook Jail by a bot... and no chance for a logical human to review the issue and see that it's a mistake. 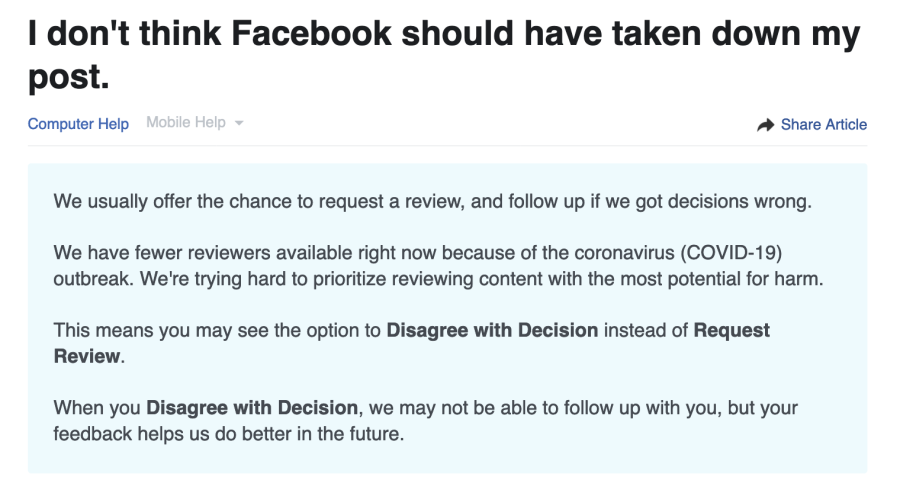 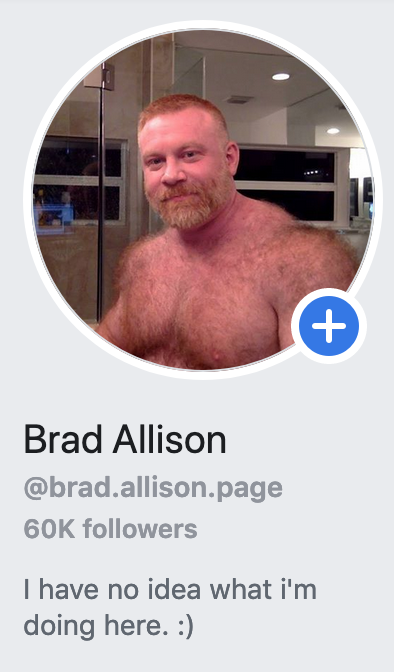